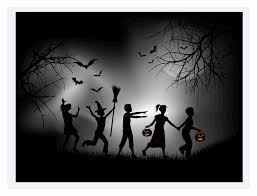 Fall is my favorite time of the year. It is the perfect time to settle down by the fire and share some tales. It gives me warm fuzzies just thinking about the change of leaves, the crisp fall air, and fresh apple crisp in the oven. My senses are heightened during the fall and that makes storytelling ever so much more "flavorful." As a child, I relished Halloween. There was a certain freedom in roaming the streets of my neighborhood with a gang of kids at night. Usually, at night I was at home working on homework, watching TV (black and white, I might add) or getting ready for bed. But, on Halloween, all the rules were suspended. I got to dress in funny clothes...usually a ghost or hobo. On the backs of cereal boxes there used to be Halloween masks that Icut out. I did cut them out, but don't remember ever using them at Halloween. Sometimes at the corner store they sold little black Lone Ranger masks, but I don't remember anything more elaborate than that. Some porches had carved pumpkins made into Jack 'o Lanterns, but that was the extent of any decorating for Halloween.

The unique thing about Halloween back in the 1950's was it was all "homemade." We didn't go to a store and buy a factory made costume...we used our imaginations and made our own. We didn't buy containers for our candy; we used a pillowcase or a brown grocery bag. The candy we received was either a whole chocolate bar or something homemade like popcorn balls, candy apples, or Rice Krispie treats. And, my gang could go out unattended. Our parents and our neighbors trusted us to have a good time without any pranks, but they kept a watchful eye on us from a distance. It was a joyful, independent, topsy-turvy night that happened only once a year.

Now that we are in the new millennium, things have changed...some for the better, However, some of the joy of Halloween has been crushed under political correctness, security concerns, and commercialism. The good news is that the stories are still there...some old; some new. I love to tell them. There's nothing like a good scary story to keep your listeners on the edge of their hay bales. I have divided the stories into several categories. When I tell to small children, it is not my wish to frighten them. So, the stories are light-hearted. As the listeners grow older they become fright-hearted. But, my stories always end with the good triumphing over evil. I believe that gives my listeners a journey that they can take with them, and the next time they face something dangerous or evil, they will have the tools to know that they have the power to make it come out right. Now, on with the stories:

"Jack and the Haunted House" at St :Louiis City School during the StL Story Fest 2015. Pictures by Heather Harlan

Ages 3-5 Of course, is arbitrary. One particular child may like scarier stories, but with a group, I like to play it safe. These stories are just fun with lots of participation and some Halloween figures thrown in. 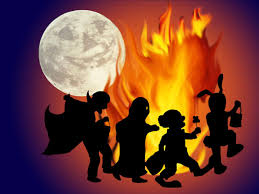 Ages 6-10 Now, I start adding some elements of suspense and maybe a jump tale. Some of these are just for fun stories too but they rely on an understanding of pun and exaggeration. Ages 11-Adult Okay, these "Gory Stories" are downright scary. They will scare younger children, so I reserve these for big ears that think they can't be scared by a dumb ole story...heh-heh-heh!

Adult These stories are not particularly scary, but they are written with adult characters and situations that may not interest younger ears.

Horror Stories: I love to listen these stories, but they come from the dark side and don't end with a happily ever after. In fact, it is more like "psychologically impaired ever after." I guess I'm a-skeered of the dark.  However, there is nothing more cruel, scarier, psychologically damaging than an original folktale - Little Red Riding Hood (the wolf is ever-so more demanding), Sleeping Beauty (the king or prince is not so gentlemanly) and Snow White (where the evil queen gets her comeuppance). For an insightful read go to The Straight Dope and read all about it. 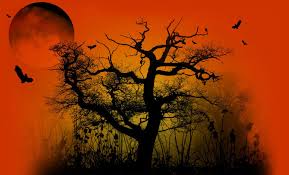 Here are some spooktacular websites with stories to keep you awake at night.

American Folklore - Halloween - Many stories to read and to listen...if you dare.

Castle of Spirits - Not only "true ghost stories" but the pictures to prove it!

Everything Halloween - more than just stories. Come have some ghoulish fun.

Ghost of the Prairie - Author, Troy Taylor is a real "ghost writer". Books and Stories from the heartland.

Halloween Ghost Stories - With a little bit of this and little bit of that - a mix of urban legends, literary tales, true ghost stories and some poetry for good measure.