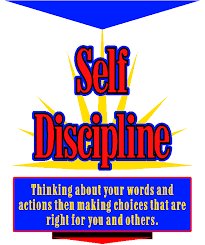 Discipline and training of oneself, usually for improvement: Acquiring the habit of promptness requires self-discipline

Self-discipline takes many forms - everything from biting one's fingernails to throwing things in a fit of anger. It is something that we struggle with everyday. One person's self-discipline in one area may be easy while it is very difficult for another. Oftentimes, self-discipline can be a too much of a good thing...not knowing when to stop. There is a saying "all things in moderation." What areas do you need to work on self-discipline? Here are a few - Being neat and tidy; being prompt; procrastinating, doing exercises; eating a good balance of food. Then, there are bigger issues - giving in to the temptations of smoking, gambling, and drinking. Others may have issues with anger management or being too curious. How does self-discipline affect the everyday lives of students? Every day they need to do their homework after school, they must keep their desks and lockers clean, they must practice their musical instruments, they must attend their sport's practices, they must take their vitamins...the list goes on. It is an issue that faces them every day. In the story that follows you will see how one of the greatest warriors of China failed to control his anger.

"The first and best victory is to conquer self." Greek Philosopher - Plato

Have you ever been so angry that you wanted to hit something? What do you do when that anger wells up in you? Have you actually hit something in anger? What were the consequences? Where is the "Far East" located on a map? What is the largest country in the Far East? Do you know the name of the greatest warrior of China?

The King and His Hawk

Thomas Jefferson gave us simple but effective advice about controlling our temper: count to ten before you do anything, and if very angry, count to a hundred. Genghis Khan (c. 11621227), whose Mongol empire stretched from eastern Europe to the Sea of Japan, could have used Jefferson's remedy in this tale.

Genghis Khan was a great king and warrior. He led his army into China and Persia, and he conquered many lands. In every country, men told about his daring deeds, and they said that since Alexander the Great there had been no king like him.

One morning, when he was home from the wars, he rode out into the woods to have a day's sport. Many of his friends were with him. They rode out in good spirits, carrying their bows and arrows. Behind them came the servants with the hounds. It was a merry hunting party. The woods rang with their shouts and laughter. They expected to carry much game home in the evening.

On the king's wrist sat his favorite hawk, for in those days hawks were trained to hunt. At a word from their masters they would fly high up into the air, and look around for prey. If they chanced to see a deer or a rabbit, they would swoop down upon it swift as any arrow.

All day long Genghis Khan and his huntsmen rode through the woods. But they did not find as much game as they expected. Toward evening they started for home. The king had often ridden through the woods, and he knew all the paths. So while the rest of the party took the nearest way, he went by a longer road through a valley between two mountains. The day had been warm, and the king was very thirsty. His pet hawk had left his wrist and flown away. It would be sure to find its way home.

The king rode slowly along. He had once seen a spring of clear water near this pathway. If he could only find it now! But the hot days of summer had dried up all the mountain brooks. At last, to his joy, he saw some water trickling down over the edge of a rock. He knew that there was a spring farther up. In the wet season, a swift stream of water always poured down here; but now it came only one drop at a time. The king leaped from his horse. He took a little silver cup from his hunting bag. He held it so as to catch the slowly falling drops.

It took a long time to fill the cup; and the king was so thirsty that he could hardly wait. At last it was nearly full. He put the cup to his lips, and was about to drink. All at once there was a whirring sound in the air, and the cup was knocked from his hands. The water was all spilled upon the ground. The king looked up to see who had done this thing. It was his pet hawk. The hawk flew back and forth a few times, and then alighted among the rocks by the spring.

The king picked up the cup, and again held it to catch the trickling drops. This time he did not wait so long. When the cup was half full, he lifted it toward his mouth. But before it had touched his lips, the hawk swooped down again, and knocked it from his hands. And now the king began to grow angry. He tried again, and for the third time the hawk kept him from drinking.

The king was now very angry indeed. "How do you dare to act so?" he cried. "If I had you in my hands, I would wring your neck!" Then he filled the cup again. But before he tried to drink, he drew his sword.

"Now, Sir Hawk," he said, "this is the last time." He had hardly spoken before the hawk swooped down and knocked the cup from his hand. But the king was looking for this. With a quick sweep of the sword he struck the bird as it passed. The next moment the poor hawk lay bleeding and dying at its master's feet.

"That is what you get for your pains," said Genghis Khan. But when he looked for his cup, he found that it had fallen between two rocks, where he could not reach it. "At any rate, I will have a drink from that spring," he said to himself.

With that he began to climb the steep bank to the place from which the water trickled. It was hard work, and the higher he climbed, the thirstier he became. At last he reached the place. There indeed was a pool of water; but what was that lying in the pool, and almost filling it? It was a huge, dead snake of the most poisonous kind.

The king stopped. He forgot his thirst. He thought only of the poor dead bird lying on the ground below him. "The hawk saved my life!" he cried, "and how did I repay him? He was my best friend, and I have killed him."

He clambered down the bank. He took the bird up gently, and laid it in his hunting bag. Then he mounted his horse and rode swiftly home. He said to himself,

"I have learned a sad lesson today, and that is, never to do anything in anger."

1. Right There: In which two countries did Genghis Kahn lead his army? What did he use to drink from? What caused the water to be poisoned? Why did hunters often bring hawks on the hunt?

2. Think and Search: Why did it take so long to fill his cup? How many times did he fill his silver cup? (4 times - the fourth was when he killed the hawk) It said in the story "He knew that there was a spring farther up. In the wet season, a swift stream of water always poured down here; but now it came only one drop at a time." Why was that? (a large snake was blocking the flow).

3. Author and Me: What two things in the story, before he tried to get the water, may have caused Genghis Kahn to be agitated? (thirsty and did not get much game) What kind of clues in the story tell you that Genghis Kahn was angry? Why do you think, that, after the fourth try at filling his cup, he drew his sword...before he brought it to his lips? (hawks are so fast he would miss it otherwise) Why do you think the king left the other party of hunters on the way home?  What kind of things could he have done to control his anger? What kind of lesson do you think this story is trying to tell you?

Thanks to Phyllis Hostmeyer for helping with QAR

In the story by James Baldwin , he compares Genghis Khan with Alexander the Great. Do some research on these two historical and famous warrior leaders. How are they the same and how do they differ?

Creative Writing: There are two other stories that follow the same theme as The King and His Hawk - rushing to judgment through anger or grief can cause dire consequences. Read these two stories The Fable of the Goat by S.Y. Agnon and The Legend of Gelert.

Before having the class write their own story along this theme. Discuss the following:

What three places do these stories take place? China in the mountains and woods, starts in father's house in land outside Israel but boy goes to Land of Israel, Wales in a castle.

What kind of words in each story give clues as to where the story came from? This could be specific descriptions or individual words (like "Queen Sabbath" or a "palace of stone on the banks of the Conwy, lived Llywelyn ap Iorwerth - Llywelyn Fawr - Llywelyn the Great - Lord of Snowdon"

What time periods did these stories take place - 1200's, does not say in the story but clues let you know it was a long time ago, Medieval times

Who killed the animals - Genghis Kahn, the father, Prince Llywelyn

For more stories like The Legend of Gelert, read these short stories: http://www.pitt.edu/~dash/type0178a.html

As you can see the setting, the characters, the kind of words used, are different, but they all tell basically the same story. Each character has a good relationship with an animal they love. Then, in a fit of anger and grief, they unthinkingly destroy the animal. Now, find your own time, place, characters, words and write your own story using the same theme.

A journey of a thousand miles begins with a single step.

Stories from fellow tellers- These are categorized by the type of self-discipline that is in the story. I humbly thank my good cyber buddies from the Storytell listserve and the Northlands Google Group for the following suggestions: Csesnge Zalka, Richard Martin, Karen Chace, Marilyn McPhie, Judy Schmidt, Priscilla Howe, Yvonne Healy, Mel Davenport

Frau Holle - a good girl/bad girl story. The good girl does as she is told, but the bad girl is lazy and gets her comeuppance.

The Wounded Selkie - a fisherman get so angry at a selkie that he drives a knife into its skin. 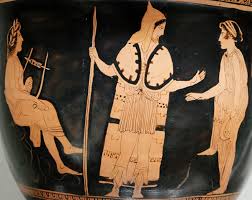 Little Penguin’s Tale, by Audrey Wood, Harcourt Brace Jovanovich, Publishers, San Diego, 1989. One little penguin does not do as he is advised. He has no self-discipline and it almost causes his sad demise.

Baby Rattlesnake retold by Lynn Moroney - Baby Rattlesnake thinks he's old enough to have a rattle. But, he gives into his desire to trick others with it...until he meet the Indian maiden.

Doorways to the Soul; 52 Wisdom Tales from Around collected by Elisa Davy Pearmain. A collection of stories with 6 under the heading of "self-discipline.

Loren Niemi: Both Zen and Sufi traditions have stories where self discipline and/or perseverance are rewarded. The various Idries Shah collections would be where I'd be looking