“If everyone were clothed with integrity, if every heart were just, frank, kindly, the other virtues would be well-night useless, since their chief purpose is to make us bear with patience the injustice of our fellows.”    (Moliere)

"January is the month to find integrity in your life. But what is integrity? If you look in a dictionary, it may read "in·teg·ri·ty  (in-teg-ri-tee) – Noun Adherence to moral and ethical principles; soundness of moral character; honesty". Or, if you look in a Thesaurus it may read: "Synonyms: rectitude, probity, virtue. See honor. Antonyms: dishonesty."

It appears that integrity and honesty have a lot in common. However, there are many ways to be a person of integrity - standing up for what you believe in as long a it's based in truth; not settling for something that is less than what you deserve; speaking out when there is injustice; being true to yourself, and, yes...honesty.  To be sure, if you have integrity, you are an honest person. But not all honesty stems from integrity. Let me explain. Let's say that you came home and there was a chocolate cake on the table. It looked so good and you were sooo hungry. So, you helped yourself. However, that cake was supposed to go to the school for the bake sale. When your mother saw a piece was missing, she asked, "Who ate a piece of this cake?"

Now, you have a choice. You could say, "It wasn't me, Mama!" But, let's get real here...your mother already knows who ate the cake. You are the only one at home. You know if you lie, you are just making it worse. You will be probably get punished for eating the cake and lying. So, you say, "It was me, Mama. I was sooo hungry! I'm sorry." You were honest...because you knew you would get punished for lying.

Now, let's change the story just a bit. You came home and on the table there were 15 beautiful cupcakes. You ate one not knowing that they are for the bake sale at school. Your mother came home, and, as she put the cupcakes in a pan she notices one is missing. "Who ate a cupcake?" There is no way that your mom knew it it you. Your brothers and sisters were at home and even some neighborhood kids. She'd never know it was you. What do you do?

The easy way out is to...not say anything or shrug your shoulders, if she asks you directly. But, a person with integrity will own up to his/her mistake. It's not easy, but it is the right thing to do and you do it, even though you could never be "caught."

On My Own:  Before you tell or read The Empty Pot ask some "On My Own" questions - What are some ways that honesty and integrity (or the lack thereof) play in their lives. For instance...how does it feel when you lie, how does it feel when you tell the truth? Why tell the truth? Is it ever okay to lie? Can you lie without saying anything at all? Is cheating on a test the same as a lie? Have you ever failed at something. What did you do? Is failing always a bad thing? Have you ever known any classmates or neighborhood friends who made fun of you because you failed? How does that make your feel?

This is just one story of integrity. There are many more. Let me tell you a folktale about a boy who lived long ago:

Once upon a time there was a emperor of China. He was good, and kind, and a good leader of his country. Whenever he wasn't busy running his country, he liked to walk through his garden. It was a beautiful garden full of waterfalls, birds, and every kind of flower you can imagine. But, one day, as the emperor was walking in his garden, he thought, perhaps, it was time for him to select someone who, one day, would take his place on the throne. He had no family of his own. He thought, "How can I select a new emperor...someone who is willing to serve the people; someone who is smart and brave; someone who can make the right decision even though it may not be a popular one."  He reached to take a dying flower off the vine, when several seeds fell into his hand. Suddenly, he had an idea.

He wrote a decree that was sent to all over the provinces. The decree read, "The emperor is looking for someone to take his place as ruler of the great land of China. The child who can grow the most beautiful plants from the seeds of the royal garden, shall take his royal majesty's place."

Ming was a young boy who lived in a far away province. He was a wonderful gardener. It seemed everything he tried to grow flourished. So, he asked his father, if he could go the palace. His father looked at his son. "Son, this is a huge undertaking. You must promise to do your best." 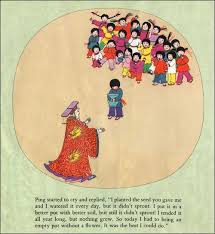 So, Ling went to the royal palace. He was surprised to see all the other children who were already there.

He waited anxiously until the emperor walked out onto the patio of his high window. The emperor was a old man with a long white hair braided down his back. His white beard reached down to his waist. He was wearing a silk brocade robe with long full sleeves. Ling and the others bowed low, until the emperor spoke.

"My children, I am so happy to see so many of you today. I must choose my successor wisely. That is why I am having a contest. Whoever can take the seeds from the royal garden and grow the most beautiful flowers, will be the next ruler of the great land of China. In six months you are to return with your pots with flowers grown from these seeds. Are you ready?"

The children applauded politely and again bowed their heads. "Very well! Guards you may disperse the flower seeds." The guards went to each child and handed them a little sack filled with seeds. When Ling received his pouch, he bowed to the guard and thanked him. Then, the children went back to their homes.

Ling was so excited when he got back home. He told his family about the emperor, the palace and the seeds. His father looked at his son, "I am very proud of you son. You have taken the first step. Now, it is time to prepare the soil, so you can plant the seeds."

After finding a big pot, Ling prepared the soil. He wondered what kind of plant would grow. Would it be tall or short? Lots of green leaves? Red, yellow or blue flowers?

Each day he went out to tend the pot making sure it had just enough, but not too much, water. Each day he anxiously awaited the first sign of the plant peeking through the soil. Each day...he waited, and waited...and...

Nothing! Nothing grew. Ling felt panic in his heart. "Father, what can I do?"

"Try putting it another pot. Perhaps, that will help." But, after a couple more weeks the plants did not grow. He tried putting in the sun and in the shade. Nothing.

Time came for the children to return to the palace. "Father, I will disgrace the family. Nothing grew!"

"Then, you must return to the palace. You honor your family by trying your best. It won't be easy, but you must finish what you started."

Ling sadly got a cart and put his pot void of any flowers into it and started on his journey back to the palace.

As he got closer to the palace gate, he could see other boys proudly bringing their pots filled with gorgeous flowers. When they looked at Ling's empty pot, they began to laugh.

Ling's heart was heavy as he entered the royal garden. He found a place in the back where he hoped the emperor would not see him. This time the emperor came out the door and began walking down the rows of flowers. Every once in a while he looked a plant and smiled. Finally, he came to Ling. There was no smile on his face.

"Who are you and what is this?" he demanded.

Ling's eyes filled with tears, but he held them back as he said, "Your Majesty. My name is Ling. I am honored that you gave me the seeds from the royal garden to grow. I tried my best, but they would not grow. I am sorry, your majesty." His head hung in shame.

With that, the emperor walked back into the palace, and seconds later he was at the high window. He looked out at all the children and the plants.

"Today, I found the child who will one day rule China. There is only one child here who did as I asked - to plant the seeds I gave you. I don't know where the rest of you found the seeds to grow such beautiful plants, but it was not from the royal garden. For, you see, I had the gardeners bake the seeds until they would not grow. Only one child among you came with truth, honesty, perseverance and integrity growing in his pot, and that young man, the next emperor of China is...Ling.

Ling looked up in surprise as he saw the emperor smiling and gesturing towards him.

And, so it was, that Ling and his family came to live at the palace. When he was old enough and educated enough he became the emperor of China. They say that he ruled well and China prospered just like the flowers he grew in the royal garden.

Note: This story is Marilyn Kinsella's adaptation of a Chinese story like the one retold by Demi called "The Empty Pot." I have read many versions of this story, each had a different name for the boy. I called him "Ling".

There are many ideas for using The Empty Pot in the classroom. The following classroom ideas also highlight character traits especially "integrity."

1. Right There: What was the plan the emperor had to choose his successor?

Where did Ling live?  What response does Ling’s father give when Ling asks permission to go to the palace?  What is the first thing Ling does when he returns home from his trip to the palace?

3. Author and Me: When the emperor walked away from Ling, after he looked at the empty pot, did Ling think he was going to be selected...why or why not? How did Ling prove he had integrity? Discuss the other character traits that Ling had and why. Was Ling's father a man of character? Why?

Thanks to Phyllis Hostmeyer for helping with QAR

George Washington and the Cherry Tree

Sniffles by Stephen Cosgrove - Sniffles, an ostrich, ruins her credibility with the other animals at the oasis by her wild exaggerations of the truth.

Whatever the mind of man creates, should be controlled by man's character.

Websites with more ideas for The Empty Pot