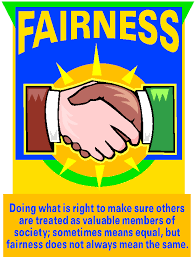 Free from bias, dishonesty, or injustice: a fair decision; a fair judge. 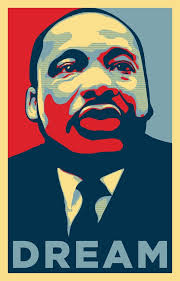 "I look forward confidently to the day when all who work for a living will be one with no thought to their separateness as Negroes, Jews, Italians or any other distinctions. This will be the day when we bring into full realization the American dream -- a dream yet unfulfilled. A dream of equality of opportunity, of privilege and property widely distributed; a dream of a land where men will not take necessities from the many to give luxuries to the few; a dream of a land where men will not argue that the color of a man's skin determines the content of his character; a dream of a nation where all our gifts and resources are held not for ourselves alone, but as instruments of service for the rest of humanity; the dream of country where every man will respect the dignity and worth of the human personality."

Fairness is the heart and soul of every child. Of the multitude of memories that we haul around from our childhood, those, when someone treated us unfairly, are still fresh in our minds. It hurts to be overlooked, put down, or singled-out. A teacher, a coach, or a relative can cast a dark shadow when grades, sports, or family matters are not carried out fairly. Much of our human "fairness" is often jaded by a person's personality, the color of their skin, or other hidden prejudices.

Many stories have the trait of fairness in them. It automatically draws us in because it is such a "red button" for the hurt memories that we stashed away. The following story is a favorite of many storytellers. It's one of those stories that once you hear it...you know it.

QAR: Has anyone ever accused of doing something that you didn't do? Has anyone accused you of something that you did not think was wrong? What do you do when someone accuses you of a misdeed? Have you ever heard the term "frivolous lawsuit?" What do you think it means? In the story, a shopkeeper accuses a man of stealing. As you listen to the story, think how it must feel to be taken to court.

The Theft of Smell

Once there was a man who had no job, no home, no family and very little money. He survived on the good will of his fellow villagers who gave him bits of food. As he walked along the cobblestone roads, he often stopped next to the bakery. Such delicious smells wafted from the open window and into his welcoming nose. On Mondays he smelled homemade apple pie, on Tuesdays, he smelled sweet doughnuts, on Wednesdays, he smelled yummy meat pies, on Thursdays, he smelled cinnamon cookies, on Fridays, he smelled chocolate cake, and on Saturdays, he smelled the delicious aroma of baking breads.

"Ahh," he said to himself after taking a whiff, "I may have no money, but at least I can enjoy the delicious bouquet of aromas." And he closed his eyes and dreamed of eating a royal feast.

One day, while he was taking in the scent of baked bread, the baker came out and saw the man enjoying the aromas of his labors. "What are you doing out here? I thought I smelled a rat! You are stealing my scents."

"What!" cried the poor man, "stealing your scents...makes no sense!"

"We shall see about that," said the baker. "Police, police, come arrest this man!"

Unfortunately, the poor man was hauled off to jail, where he awaited his trial.

When the day, came to meet the judge, he was taken by handcuffs to the court. The judge looked down over his wire-rimmed glasses at the two men. "What have we here?"

The baker, still angry, started shouting, "This man, this bum...has been stealing from me!"

"I see," said the judge, "and just what has he been taking from you?"

"Everyday this man comes and stands outside my bakery. He never buys anything and yet, he enjoys my baked goods."

"That is terrible," said the judge, "you mean that he steals your food!"

"Not exactly, your honor," said the baker, "in fact, he never even sets foot in the bakery."

"Then, I don't understand how it is that he is stealing?"

"Well, he smells the aromas of my cooking without paying for them."

"Oh, now I see," said the judge. "He enjoys the scent without paying a single cent!"

"That is correct, your honor."

The judge looked at the homeless man and said in a stern voice, "Is this true? You have been accused of the theft of smell. What do have to say for yourself."

"Your Honor," the homeless man began, "it is true. I do stand outside the bakery. The smells that come from the bakery make me forget my miserable life and, for just a few seconds, I can dream I'm feasting on fine food. I did not know that what I did was wrong."

"I see," said the judge, but ignorance of the law is no excuse."

The baker nodded and smiled at the judge's wise words.

The judge looked at the baker and said, "To recompense you for this theft, I want this thief to go home and get every bit of money he has and bring it to the court early tomorrow morning." The homeless man was distraught. It was the last of his money, but he did as the judge asked, and returned the next morning with a bag filled with assorted coins.

The judge took the bag and said to the baker, "Now, come close." The baker smugly approached the bench.

The judge took the bag and shook it vigorously, "Do you hear that?"

"Then, that sound is your payment for the theft of smell! And, since you wasted the court's time with such a ridiculous lawsuit, I hereby, declare that you make a baker's dozen of every thing pastry and donate the 13th baked good to the food pantry. That way other poor people can not only enjoy the aroma, but the taste of your fine ware. So, be it!"

The Theft of Smell  can be found in Sharon Creeden's book of justice tales, Fair Is Fair

Think for yourselves and let others enjoy the privilege to do so too.

2.      Think and Search: In two places in the story, the storyteller used synonyms to make a play on the word “scent.” What were they? (“…stealing your scents...makes no sense!” and "He enjoys the scent without paying a single cent!")

3.      Author and Me: In this story the judge chose to pay the baker with the sound of the coins. Was that a fair exchange? What did the storyteller mean by “make a baker’s dozen?” (make 13 items).

4.      On My Own: If it would be against the law to smell the “labors of the baker,” what other kinds of smells could be against the law? (smelling roses in someone gardens; smelling barbeque on someone’s grill, etc.)  Can you make up a sentence from the story using two or more of the words “sent, cents, scent, and sense?” (ex. The judge made a lot of sense when he sent the beggar home to get a bag full of cents to pay for the pleasure of the scents.)

Give no decision till both sides thou'st heard.

Thoughts to Ponder with Your Class:

While inspired by the ideal of justice, fairness is not sameness or always following the letter of the law. Fairness makes room for us to generate solutions and compromises based on reason and circumstance.

Definitions of fair and equal.
Equal = the same
Fair = you get what you need

Example: someone with a broken leg.  It would be equal to make him or her run the mile in PE, but not fair.

Are fair and equal the same?  Sometimes yes and sometimes no.

Put up overhead and have students repeat “THAT’S NOT FAIR” after you.  Show examples of equal and not equal- fair and not fair.