When I was a kid, I hated Sunday afternoons! Not only did they herald the end of my weekend, but the beginning of school. And besides that at precisely 2 o'clock on Sunday, my father would insist that I accompany him to visit my Grandpa Niemann in East St. Louis. Now, don't get me wrong. My grandpa was a good man. It was just that he didn't relate very well to a feisty seven-year-old. And, well, I was a feisty child. The photo I carry around in my brain is that of my grandpa sitting in front of his old Philco radio with his good ear cupped to the speaker.

The first pic has my grandparents - Sarah Dixon Niemann and William Niemann. The middle pix were taken in my Grandparents front yard facing northwest. You can see the RR crossing, St. Elizabeth's Church caddy-corner across the street, and a complex of flats to the right of the picture that were torn down sometime in the 1950's. The two boys are my older brothers Bill and Chris Niemann. They went to St. Phillip's grade school but finished at the new St. Albert School. Circa 1946 - I was not yet :"in the picture."    "47 was taken in front of the porch. You can see the big pillar towards the center. The next pic was in the backyard - this was my secret place. I finally made a Christmas pic in 1950 - girl with the muff.

I think what bothered me the most about those visits was the house itself. It was a silver-stoned bungalow on North 25th off State Street in East St. Louis. I remember darkened rooms pierced with dusty beams of light. The minute I walked in the front door my nose was assaulted with a mixture of Palmolive soap, Ben-Gay and...stale Muriel cigars.

But, it wasn't always like that. Just two years before the house was full of lavender and light. That was when my Grandma Niemann was there. My Grandma Niemann was your quintessential grandma - silver gray hair brushed into a bun at the base of her neck and sparkly blue eyes that seemed to take in color and reflect a rainbow. Unlike the rest of my German ancestors, she was English. Her name was Dixon, Sarah Dixon. And she bought a little bit of England into her home - doilies on the furniture, a spot of tea at 4 o'clock and then there was her garden - a beautiful English garden at the back of the house. 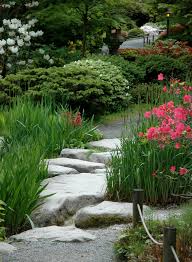 Entering into that garden was like entering a whole other world. To enter you walked through an arched trellis where red roses laced their way around the lattice work. There was a path of irregular shaped stepping stones that winded its was through the garden. As you walked along you passed pools of sweet alyssum and black-faced pansies. Standing sentinel against the white picket fence were rows of pink and red hollyhocks. At three corners of the garden there were tall metal poles. At the tops of those poles were wooden airplanes fashioned by my grandpa. Their propellers lazily twirled in the breeze. In the middle of the garden there was a cherry tree that was my grandpa's pride and joy. He had planted it when they moved there. Not only did it provide cherries for my grandma's famous cherry pies, but also cherries for Grandpa's infamous cherry wine.

My favorite part of the garden was the far corner. There grew a huge weeping willow tree. Its branches hung down like a shaggy dog's mane. It was my secret place. I could hide inside that tree and see out, but no one could see in. When I came to visit, I set up my imaginary village. Sometimes I could see my grandma working in the garden - a straw hat on her head, white garden gloves on her hands and gardening tools at her side. At approximately 4 o'clock, she'd come over and pretend to knock on my pretend door. "Would you like to come inside for a spot of tea now?"

One day while she was working, she broke the trowel. She asked me if I wanted it. What a treasure! Now I could dig and bury in my secret place. And dig and bury I did. I often went throughout the house finding any little what-not, doo-dad, or thing-a-ma-jig and bury it. I made a mental map of where I had buried my treasure, and then come back the following week and rediscover my hidden booty. One time I found a silver thimble and buried it along with some other scraps. The next week my grandma met me at the door and asked me, "You wouldn't by any chance know what happened to my silver thimble - the one I keep in the right-hand cubby of my sewing box?" I shrugged my shoulders as if in pure innocence, but my face must have turned beet red with my lie. She just laughed and said, "Well, Miss Apple Cheeks, if you happen to find it buried somewhere, you will make sure that it gets put back where it belongs." By the time I left, the thimble was back.

Sometimes, when it was raining, we couldn't stay out in the garden. Then, we sat together on the front porch. My grandpa put up a wooden bench swing. We sat there listening to the creaking and cracking of the metal chain as we swung back and forth. We laughed at the passing cars looking for all the world like motor boats on those rain-swelled streets. There were railroad tracks that ran along side the house. Invariably a train would pass. We sat there and counted every car. Then she told me to make a wish.

But after awhile things got a little boring and she'd say, "I'll be right back." I knew where she was going, but I waited in anxious anticipation. Soon she'd reappear in the doorway with a cigar box tucked under her plump little arm. It was grandma's treasure box. She very ceremoniously sat down next to me and say, "Well, what have we here?" She opened the lid of the box. Inside there was a tiny white Bible no bigger than my thumb. It had beautiful golden gilded edges. There were a scattering of holy cards and the insides to a music box. She picked up the Bible and read a passage or two. Then, she looked at the holy cards one by one telling me little stories about the saint. The holy cards were all made out to my dad who must have been some kind of scholar to amass so many holy cards. Then, she picked up the insides of the music box and found the key. She placed it just so inside the box and gave it a twist. Soon the sound of those bells filled the front porch and spilled out onto the street. "That's the Blue Danube," she said. I didn't know what a blue Danube was. All I knew was that I loved the sound of those bells and the feel of my grandma's soft puff-a-lump nest.

One Sunday my dad came to me and said that Grandma wouldn't be there. "Why?" I asked.

"Because she's sick and in a hospital," he replied.

"Well, if she's sick maybe I should go and visit her."

"But why not," I demanded to know.

"Because!" was my father's only answer. I knew when my dad said that, it was the end of the conversation.

What I know now, that I didn't know then, was that Grandma was suffering from hardening of the arteries. Back in the

fifties there was very little known about the disease. All they knew was that she was acting strange. So the last two years of her life were spent in a mental institution.

It was during this time that my visits to my grandpa's took a turn for the worse. I came through the front door, gave him a kiss on his whiskered cheek, and out the back door I went. During that time I discovered something about my secret hiding place. I found out that if it wasn't raining too hard, I could stay there. I'd feel as snug as a bug. My imaginary play could continue and I could avoid that dreaded house.

One day my dad told me that Grandma had died. I felt really bad. Afterall, I wasn't even able to say goodbye.

But, the Sunday visits continued. One afternoon as we drove down the street to Grandpa's, I could see the black clouds billowing over St. Elizabeth's steeple. I knew I was going to be stuck inside. When we got there, I sat down on the musty, dusty couch and read and reread "Prince Valiant" and "Brenda Starr" out of the Sunday comic section. No matter how many times I read them I still couldn't make any sense out of them. So I decided to go on a snoop. Oh, I was a great snoop and I could find the most unusual things stored at my grandpa's.

I went to the back porch which was open but screened-in. This was where my grandpa stored a lot of junk - broken tables and chairs, mason jars filled with unmarked fruits and vegetables, and an old cupboard. As I was rifling through the shelves and drawers, I spied it on the top ledge of the cupboard - the cigar box! I knew I shouldn't, but I climbed up on the counter, and balancing on my right foot and holding on with my right hand, I reached up and was just barely able to grab the cigar box with my left hand and bring it down.

I sat down on a broken chair and very ceremoniously opened the lid. Inside were all of Grandma's treasures. I picked up the tiny white Bible and amazed myself - for now I could read the verses. Next, I looked at the holy cards. I again marveled at my father's academic excellence. "To Frederick - for superb spelling, to Frederick - for mathematics." I was in the third grade and hadn't won any. Then, I picked up the music box and found the tiny key. I placed it inside - just so - like my grandma did so many times before. I twisted the key and soon the tiny bells filled the back porch. Just then, I saw a shadow across the doorway to the kitchen. It was Grandpa. He had his good ear cupped to the back room, and he had a far-away look in his eyes. "The Blue Danube? Why Sarah and use to dance to the Blue Danube when we were young."

I thought, "Grandpa? Young? Dancing?" I just couldn't imagine. Quickly I closed the lid. When he left, I put it back where it belonged.

Next Sunday was beautiful. I gave Grandpa his perfunctory kiss and out the back door I ran. I ran all the way back to my secret place and sat down. But I sat on something hard. When I looked down there was the cigar box. I never told Grandpa that I found it, but I knew it was for me.

I opened the box and there were Grandma's treasures - the Bible, the holy cards and the insides to a music box. I found the tiny key and turned it until my secret place was filled with the sound of tiny bells. I closed my eyes and imagined a young William and Sarah dancing to the strands of the Blue Danube.

And now I wish I had those treasures... but I buried them. Along with all those other childhood memories. But that's okay, because sometimes on rainy Sunday afternoons, I'm able to dig through that old memory box of mine and wonder at the many treasures I hold.